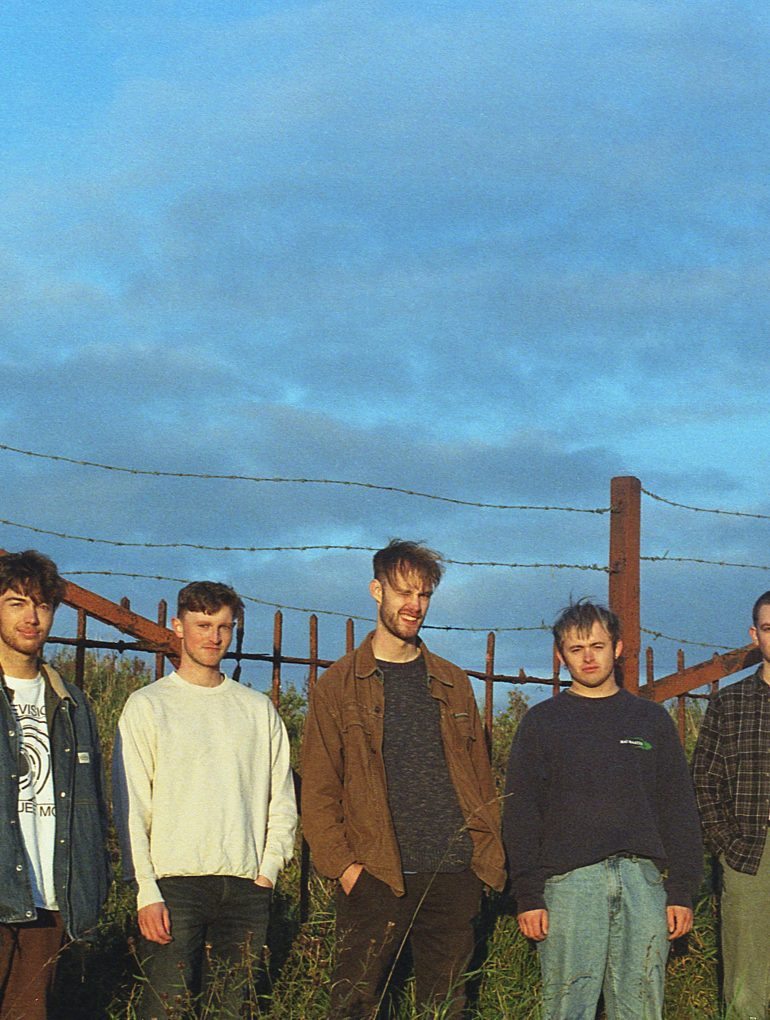 Turnstiles is the self-titled EP of Galway five-piece Turnstiles, made up of Callum Mitchell on vocals, Colm Sweeney and Cillian Ryan on guitars, Luke Mulliez on drums and Jake Tiernan on bass. It marks the first full EP of the band and is released on Furbo based Blowtorch Records, geographically making Turnstiles as West Coast Punk as you can get.

Turnstiles are a band developing their sound. Prepared to work hard, 2020 saw them release singles Tantrum in February and I.D.C. in April. This record takes a more overt post-punk tone then some previous music by the band, but it excites and compels and sets Turnstiles well on their way to becoming masters of their craft.

I first came across the band while playing with Field Trip on a night curated by bass player Tiernan in Áras na nGael, Galway City. It was a high energy interaction between audience and band that night. Turnstiles’ vibe and performance reminded me of the likes of IDLES or Amyl and the Sniffers, the band’s curation of the night only adding to their DIY credentials and sound. This EP explores the development of that sound: its production is exemplary, its delivery is polished, and its energy is nihilistic.

The work of Daniel Fox on mixing duties has paid off with production on the whole record exemplar. Fox has produced some of the best records in Ireland recently (I loved his work with Paddy Hanna) – finding that fit between producer and musician can be difficult for emerging bands and it speaks volumes to the maturity and professionalism of Turnstiles that they have made this match happen.

Something to Die For opens with a scream but gives way to buzztone guitars, the bass and guitars duel in the song and the beefier sound of the quintet shines through. Mulliez on the drums is highly impressive and the interplay between percussion and guitars reminds me of early Bloc Party – the band’s rhythms are consistent and driving. This consistency gives way to flourishes of ingenuity in the second track on this record, Just Bleed.

There’s imagination in this EP, along with interesting structural choices. The structure is clever, and half beat tempo changes help hammer home the sound of the band. Mitchell’s lead vocals range from the political to the intense and there is a tinge of the New Romantic about them for me, with lyrics and style reminiscent of Julien Gough, lead singer of 80s Galway band Toasted Heretic.

In a State is the third track and, for me, their most overtly political song. It is an escapist track, with anarchistic tendencies, but the band’s message is once more driven by their sound. It leaves a resonance with the listener. The driving tempo and balanced guitars is reminiscent of Australian bands like Rolling Blackouts Coastal Fever and Eddy Current Suppression Ring.

Final track, Omniscient Delusion, is a hook laden finish to the EP and feels like the closest thing to a party tune on the record. It is a strong closer which reminds me of the likes of Sickboy, an Irish band from a couple of years ago.

There is a strong and genuine sentiment behind this record – Turnstiles ask us to consider our own individual actions while considering societal structures. I am excited by the musicality on show and where the Turnstiles sound might go. They seem to have a broad set of influences and, in a production sense, have made a match in heaven with Daniel Fox. I look forward to a a full-length LP and perhaps, maybe, even a mosh in Áras na nGael from Turnstiles in 2021.