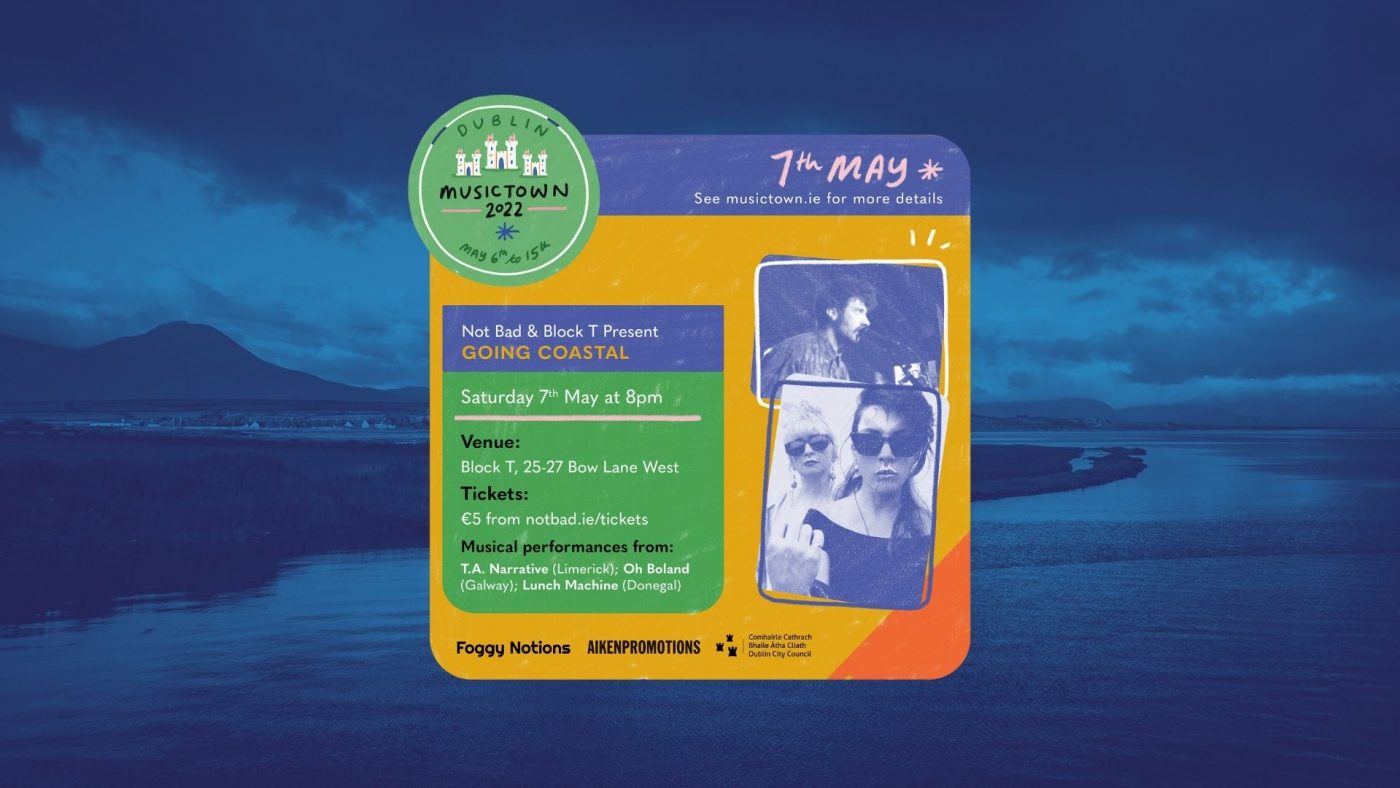 This event will be BYOB and will be hosted in BLOCK T Studios Dublin 8, an independent cultural space home to over 40 artists and makers.

Not Bad aims to promote original music from the western edge of Ireland and develop new ways of supporting a sustainable culture of independent music making in the region.

T.A. Narrative are an Electro-pop duo from Limerick, Ireland. Beginning as a studio project in 2019, the pair previously worked on several music projects together, most notably as one half of 00’s Indie-pop band ‘We Should Be Dead’. The pandemic encouraged them to begin releasing music. The self-produced duo have built a foundation on creative ideas and an experiential outlook.

These songs, a half wracked landscape of diminished pop hooks and nervous guitar scrawls. Beer mat bile rags tracing agrarian tragedy out of the unbridled motion of 70’s punk and power pop.

Starting in 2012, the original line-up released two EPs and a split LP through Dublin Indie collective Popical Island before the 2016 release of debut LP Spilt Milk on Volar Records (San Diego, CA, USA) which was included in Pitchfork’s Top 20 Garage Punk albums of 2016.

Now relocated to Dublin with a new line-up consisting of Ross Hamer(Postcard Versions) and Sarah Grimes (Grave Goods), 2022 saw the release of sophomore LP Cheap Things, a tour of Ireland with Protomartyr.

Catching Oh Boland live is wholly recommended, the musical joins visible in the best early-Pavement way. It’s the kind of thoughtful-yet-careless thrash that makes people put pints down and crane their necks to see what the hell is going on. In a city near you soon, presumably.

Encouraged by her friends’ response to her original music, Jude Barriscale formed Lunch Machine in 2017. She along with Robert Mulhern, Pearse Owens and Kieran Devlin – on bass, guitar and drums respectively – draw from myriad influences and genres in their song-writing and delivery. Mainly, garage rock, new wave and psychedelia. They’ve played around local venues and festivals in Donegal, notably Swell and Stendhal. Their debut EP ALT FACTS is available on Bandcamp and they are working on a collection of singles they plan to release soon.