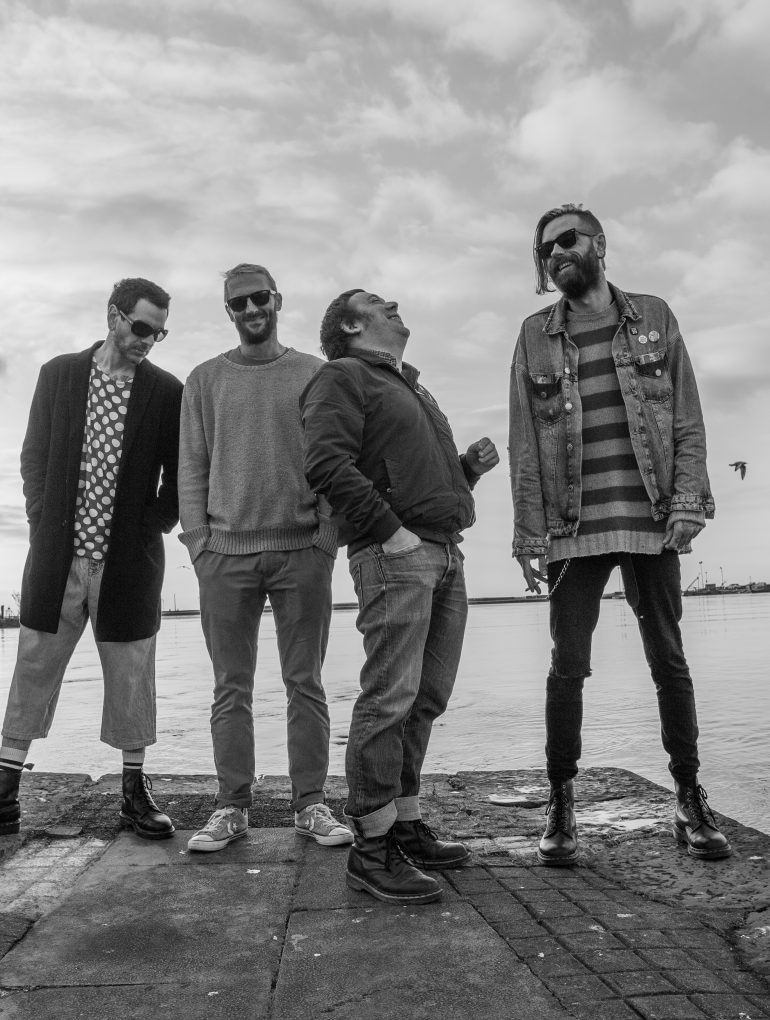 Slyrydes release Boy in the Debs Suit, a visceral buzz saw of a track

One thing that the lockdown has proven over the last year is that the Irish music scene has a resilience unlike any other. Bands took the challenge of no more gigs and restricted movement and looked at these as new ways to improvise and work together. From live streams to weekly covid covers, videos band kept churning out content and keeping the show on the road. Galway’s Slyrydes are a band that at the beginning of 2020 were just hitting their stride with debut release Point of View gaining national airplay and being championed by Today FM’s Paul McLoone. Then, everything was put on hold.

However, this didn’t seem to slow down their momentum. They adapted and, thankfully, this has led to a slew of singles over the previous year or so, including Mental Health, Dangerous Animals, Out Patience and I Claim to be Intelligent. Between lockdowns they also found the time to record an album in Darklands studio Dublin and now they’re back with newest single Boy in the Debs Suit, a visceral buzz saw of a track that deals with the loss and isolation that the pandemic has only exacerbated, while also touching on the very close to home Galway subject of missing persons and mental health. Fuz had these few words to say about adapting to new writing ways and how the band has come together through dealing with their own issues:

So first of all, we wrote this song over Email. We did that with nearly half of the songs on the album. We had just released I Claim to be Intelligent last March when the lockdowns started. We, like so many others, had huge plans for 2020. We were going to finish writing our album and record it as soon as we possibly could. Lockdown made everything different for everybody. It affected us hugely as we don’t all live in the same town anymore. Rafto, Our lead singer and Mark the guitarist still live in Galway where they’re from but I had moved back to Drogheda, where I am from originally, and Paul our drummer moved to Spain at the start of 2020 with his wife.

Under normal circumstances we had stand in live drummers and, for bigger shows or writing sessions, Paul was able to fly home to Galway.

But now we were stranded. Mark and I began to write riffs and send them to each other. This escalated into recording these riffs to a click track and sort of fleshing out ideas for songs.

We would then send the bones of an idea to Paul in Spain who would use Logic to sequence drum patterns over them.

With lots of emails, lots of editing, copy and pasting, we were able to continue our writing process. This continued until restrictions were set to be eased around August/ September last year. We booked studio time with our Producer Dan Doherty in Darklands in Dublin to go record the album. We had never played these songs together. In fact, Mark and I had never even played these songs standing up.

Rafto, our vocalist, doesn’t do technology – a thing I both love and hate about him.

We had sent him the tracks but we didn’t know what he was going to be singing on them. We heard no demos or rough recordings. He doesn’t even own a smartphone.

We had one week’s rehearsal in Galway together to get these songs tight and to actually like, HEAR them properly before we went into the studio.

It was very possible it wasn’t going to work. We had never attempted anything like this before. Usually we are standing feet apart in a gritty practice room playing part by part over and over until we are happy with it. We feed off Rafto’s lyrics as he writes them. For our earlier singles when Rafto hears us play aggressively he shouts aggressively or when he hears us play ominously he starts to sing about things that are ominous…

As our band developed over the years we have been through so much in our own personal ways and as a group. Members of the band have been through rehab, the mental health system in the HSE, been arrested and have been through full on breakdowns and addictions. It’s brought us so close as a band. We’ve really grown as people together. It’s something we are very serious about.

It’s also something we need to write about.

When you see pictures of missing people it’s a harrowing jolt, especially when you’ve known them to see. When you’ve personally been at the very edge there is a palpable sense of connection. I think that’s mainly what this song Boy in the Debs Suit Is about. “We were in the same place” is a line that really hits home.

We don’t actively TRY to write sad songs. It’s just a subject we feel strongly about. The mental health services in Ireland need a lot of work. Sometimes people feel like they are shouting into the void.

Boy in the Debs Suit is out now, with a video produced by Gavin Kelly, Joe Kelly and Stevie Healy.