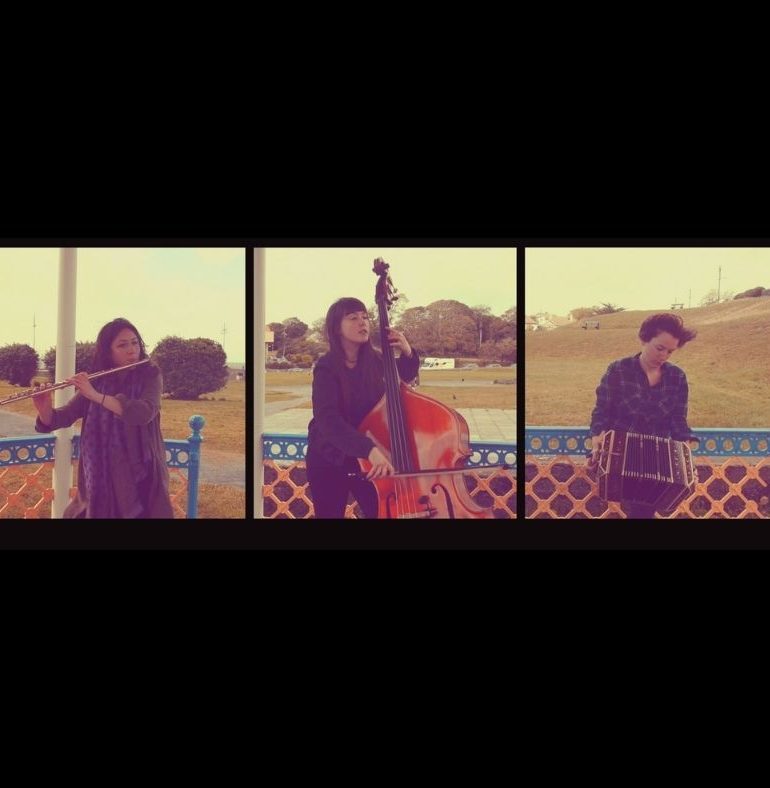 Regular readers of this site might recall a gushing review of Agustina Taborda’s debut album I Bhfad ar Shiúl and will understand our excitement upon hearing of Laguna, a trio formed by Agustina and two friends Mila Maia and Elva Carroll. Based out of Galway, this unique ensemble are inspired by Jazz, Irish trad and folk, Tango, Baião, Choro, Milonga, Zamba and Chamamé which they channel through double bass, bandoneon and flute. It’s this eclectic combination of influences, instruments and creativity that give Laguna such a distinctive and cinematic sound.

The Weight of Snow is the debut release from the band and the actual first piece that they worked on together. It comes with a captivating and beautifully shot video, filmed in Galway’s iconic Salthill bandstand by local artist Marta Barcikowska.

Because our music is reminiscent of different places in the world, we wanted to shoot in a location that screams Galway. We wanted to shoot the video in one continuous shot where we flow with the form of the musical piece… we just had a silly time miming and swapping each other’s instruments, getting swept into the excitement of making a video and we had lots of fun

The music itself has a vast and epic scale to it and was inspired by a particularly cold winter five years ago:

The piece was born in the south of the south, inspired by a cold winter that brought a non expected quantity of snow, bringing happiness and surprising the locals and tourists. The snow “cake frosting look” on houses rooftops, the frozen forests and the pine’s branches holding the weight of the snow coexisted with the melodies that five years later was reborn in Laguna’s experimental rehearsals