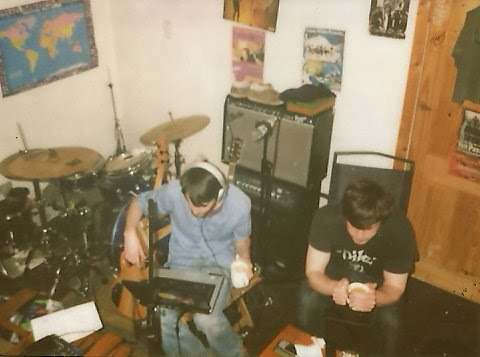 Music For Dead Birds: “Unfortunately I can never really stop writing. It’s like a ball and chain”

Once stalwarts of the Galway indie scene, Mayo grunge-anti-folk duo Music For Dead Birds recently returned to our ears with the excellent double single Summer in Suburbia / Untied. In truth, the band never really stopped releasing music but were pretty low-key about it – you can check out their rather substantial discography on Bandcamp which is full of well-produced and well-written gems.

We caught up with singer/ songwriter Jimmy Monaghan to see what he’s been up to since those carefree early days in Galway and what the future holds for the duo.

MFDB have been making music since 2008, which is some going! How did it all start? Tell us a bit about your backgrounds and how you got together.

2007 to be precise, but yeah, it’s a long time. We’re both from Mayo, I’m from Belmullet and Dónal’s from Kiltimagh, and our bands played at the same gig and we met that way. Actually we had met on Myspace before ever meeting in person. Dónal was playing in a band called Drunken Monkeys and I was playing in a band called Kumari. Drunken Monkeys were much more popular than us and I was a little jealous as they had beaten us in a battle of the bands in Swinford, so I made it a point to add Dónal as a friend on Myspace, kind of a keep your friends close and enemies closer kind of thing. But then we just became friends. We both moved to Galway in 2007. Dónal was doing a course in GTI and I was busking. Simpler times. My band Kumari had moved up to the big city in hopes of fame and fortune, but my bandmates got sick of being broke with no gigs so moved on with their lives to college and jobs, but the drummer had left his kit in my place and one night when Dónal was over we did some recording with a 4 track. Have been collaborating ever since.

Nice. How did you find Galway at that time? Take us back to those heady days! You ended up working with legendary micro-label Rusted Rail, right?

Galway at that time was wonderful. When you’re 19 you have a lot of optimism because you haven’t been spoiled by the reality of life yet. I can still smell the Corrib flowing on what seemed like endless summer nights spent on the sparch. Coming from Belmullet I often felt like an outsider for being into alternative culture, so moving to Galway gave me a sense that I was finally around like minded people, and going to gigs was a big part of that.  There were some great bands around at that time, from The Ghostwood Project and Jung Turks to Mirakil Whip and The Cartoon Thieves. It definitely felt like a healthy and inspiring scene. Not long after playing our first gigs in Roisin Dubh we were invited to play at the Bell, Book and Candle festival, which was a small festival played in the best shop in Galway. We met Keith Wallace from Rusted Rail there and released our first album with them 2 years later. We had put out a few handmade Eps up to that point, but Keith was the one who had the idea to do a mini-album (8 tracks on a 3 inch CD), mainly comprised of tracks from the EPs and a few new ones. He curated it and picked the songs and helped a lot with putting it all together. We did a launch gig for that upstairs in Roisin which turned out to be a great night and the place was packed. For those of you who know, upstairs in the Roisin is small and isn’t hard to fill up, but for us at the time it felt like a great accomplishment

After that release with Rusted Rail, MFDB put out the double single Black Tides Falling followed by album The Pope’s Sister in 2011 – BBC Ulster called it “at once hugely original and amazingly accessible… one for fans of slacker lo-fi bands such as Sebadoh, Polvo and Soul Coughing”. Would those influences fit for MFDB at that time? Who else were you inspired by in the early days?

Actually yeah they were spot on with Sebadoh, I listened to their album 3 non stop for a few months before recording The Pope’s Sister. I was convinced that lo-fi indie rock was where it was at. There was something about the lo-fi quality that seemed to reinforce the sentiment behind the music. The attitude had a kind of postmodernist college-dropout edge to it, a middle finger to the status quo. I liked that it sounded as though it could have come from the Nag Champa scented basement of some random degenerate rather than an attention seeking try-hard in some posh studio with famous engineers. Finding that music was like a switch going off in my head;  “Hey I have a 4track, I can do that!”.  As far as other artists who inspired me at that time go, there are really too many to mention but, the biggest was probably Elliott Smith. Finding his seemingly endless back-catalog of gold was eye-opening and dare I say life-changing.

A “Nag Champa scented basement of some random degenerate” sounds about right for Galway at that time (or any time maybe). I know you ended up recording the album Pagan Blessings in Vietnam in 2018 but how did you get to that point from A Pope’s Sister in 2011? There was an album and a couple of EPs in between – were they “Galway” albums or had you moved on by then?

I last lived in Galway in 2014, and moved away just after we released the Vitamins albums that year. So after that album I suppose there was no real Galway connection to the tracks anymore, and that we had become a ‘Mayo’ band (though I still consider Galway my spiritual home). Then I spent a year in Malta and came back to Ireland in 2015 to record the Your Brand New Life EP and English Weed single and ended up moving into a flat in Castlebar where I pretty much wasted away for two years. In 2017 we released Nail and Tooth EP which was recorded at a Dublin rehearsal studio where Dónal lives (he lives in Dublin, not the rehearsal studio). After that was put out I went travelling in South East Asia for 3 months, which ended up turning into 2 years in Hanoi, Vietnam. While there I recorded Pagan Blessings, which is kind of a manic mess representative of my time there. Without Dónal on the drums the thing took me forever because I’m not a real drummer and it became a thorn in my side more than anything, so when I actually finished it I decided it would be the last Dead Birds release I made completely solo. I left Hanoi in December 2019 with the intention of working on a new album and gigging in Ireland again, then along came this pandemic to scupper plans.  And so here we are.

And where are MFDB now, artistically speaking – is there another album on the way? Will you have a different approach to writing/ recording than previous records? Has your writing been informed by world events, such as the pandemic or politics?

Yeah unfortunately I can never really stop writing. It’s like a ball and chain. I’d love to focus on other areas of my life, like having a career or starting a family or something, but it seems as soon as I finish one musical project I start work on another one and become completely obsessed with it, to the point where I’m unable to focus on anything else. It’s really not financially viable. I’m not sure if there will be another full album this year or next as I’d like to focus more on recording stand-alone tracks. For so long the ‘album’ has been the creative calling-card for musicians. It’s like, you put a lot of work into a track, and people complain it’s not enough, that it should belong to a bigger idea. And so you put it together with other songs and then people complain it’s mostly filler. You can’t please everyone so best just to please yourself. You can probably expect some new singles/EPs from us either later this year or next year. In this digital era, I think songs have more weight than albums. If you can keep someone’s attention for three and a half minutes then you’re doing well.

Hopefully the only difference in approach is that we’re constantly getting better. I mean, I used to write a lot more in my twenties. Maybe I would write two or three songs a week, now I’m lucky if I can manage two or three decent songs a month. There definitely has been a shift from quantity to quality, or maybe just getting older you become more critical of yourself. When you’re younger you have this confidence in your abilities which is crucial for expressive songwriting. But the older you get the more you’re apt to hold back; “Oh I can’t say this,” or “People will think that’s too simple” etc.

We’ve never been an overtly political band, but I like to think that the liberal ideas expressed in our songs have some kind of political message deep down. I like the idea of some ultra-conservative person finding our music and then changing their outlook because of it, but that is certainly wishful thinking.  It’s hard not to be inspired or informed by the current state of the modern world. When the pandemic first hit it was crazy, like totally mind-boggling, whereas now it just seems normal and a bit boring to be honest. People have become more disconnected, which is terrible on one hand because spending time with new people is the best inspiration for songs there is. And on the other hand I really feel people need honest music that reflects what’s going on around them.