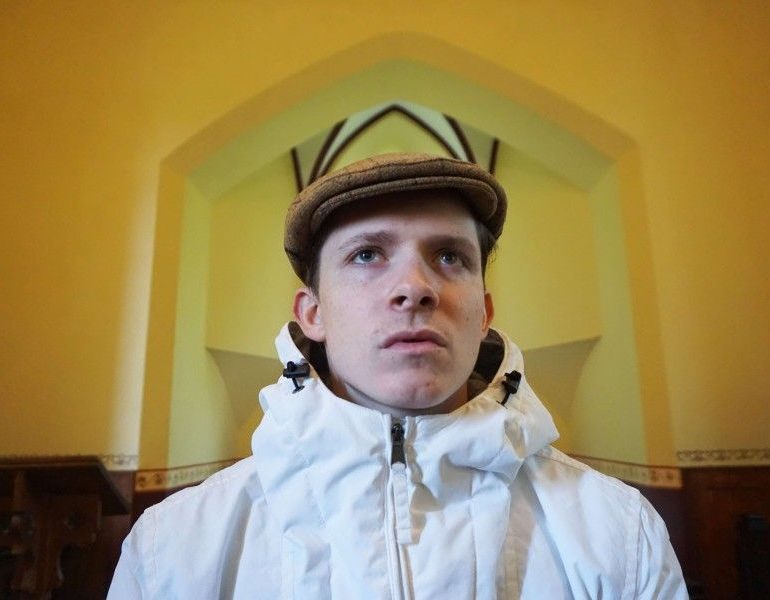 Important albums can seem like a rarity now days, especially in an era where every album is at your finger tips. It really takes something special for albums to connect and worm their way in. This past week I’ve had the joy of listening to two albums that did just that. Now as much as this blog is dedicated to West Coast music and this review is about Strange Boy’s (Jordan Kelly) new album HOLY/UNHOLY, I would like to take a moment to write about Kojaque’s new album, Towns Dead. On this new album Kojaque attacks the ever growing social problem of the Irish housing crisis and how it is destroying Dublin rental market and forcing artists to leave, and others to take up less legal means to try and make ends meet. It is an album about societal destruction that is currently happening across the country, and it is a album that keys into these themes in a new and exciting fashion, Which when listened to back to back with Strange Boys new album, HOLY/UNHOLY, it is hard to not notice the comparisons that are clearly to be made between the two.

Where as Kojaque’s album spotlights the continuing and growing problems that are causing people to leave Ireland once again in large numbers, Strange Boy’s album digs slightly deeper in tackling what happens to the people who are left behind. By bringing his own personal struggles to the forefront of the album, themes such as emigration, depression, alcoholism and suicide are touched upon in a frank and passionate way while also being completely understood by any listener living in Ireland right now. It is this ability by Strange Boy in bridging these issues and melding them together, with the atmospheric and haunting use of Traditional music that sets this album apart from everything else in the current Irish hip hop scene. Along with Enda Gallery’s (FKA DELUSH) beautifully handled production and honest lyricism Strange Boy is also joined by Family, Sean McNally Kelly (his Brother), friends in Hazey Haze, and folk music royalty in Moya Brennan, each one adding to the level of style and accomplishment this album achieves.

Though there is a physical distance between these two artists, Dublin and Limerick, it is important that both albums can be seen as a touchstones to gauge the current pulse of the youth in Ireland. Making their voices known and putting it in no uncertain words, that Ireland is in a rough state and has been for a while. Strange Boy’s album is an important, uncompromising, evocative and compelling piece of music that gives an insight into the struggles faced by the youth of the country right now. It is a piece of work that sets Strange Boy ahead of the pack in an already immensely talented Irish music scene with a musical vision unlike any other.

Produced by Enda Gallery and released on Welcome To The New World, Strange Boy’s HOLY/UNHOLY is out now.