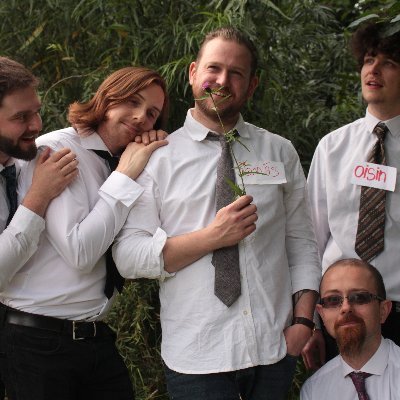 A track by track of BMWMM’s Life as it Comes

Due to a Spinal Tap esq’ rotating door of members, Bury Me With My Money have been accused of biding their time over the past two years… However, during a small window of opportunity in the unforgettable year of 2020, the band did manage to find their feet long enough to record an appropriately named EP Life as it Comes.

Bury me’ experienced major turbulence during the first few years of coming together. The band saw the coming and going of three drummers until, in late 2019, they found someone with more permanence in Galwegian Adam Downey (best known for his work with Tracy Bruen & Jamie Harrison).

This same settling period saw producer Joseph Padfield, who joined lead singer Tomás Concannon at the band’s inception, make the move from synth & sample wizard to bass player alongside long standing guitarist Oísin Brennan. Padfield’s move to bass left a gaping synth shaped hole in the band, one that was eventually filled by an Australian who only landed on Galway’s shores the first week of Ireland’s covid lockdown: Dylan Hooper. Hooper remained with the band for less than a year, but this was just enough time for the 2020 Bury Me With My Money line-up to complete work on their second EP Life as it Comes.

The new release from the five-piece is a move from the longer, more experimental arrangements of Karosi, to shorter, more focused songs that could be accused of being pop tunes. The production and arrangements show much more punch and purpose this time round too, perhaps showing signs of a more defined “Bury Me” sound.

Life as it Comes – Track by Track

The opening track ‘Level 2’ softly introduces you to the EP with a sizzling synth pad sound. Then, like a marching band kicking into action, a strong heartbeat rhythm lays the foundation for dueling synth/guitar melodies that continue to do battle throughout the song. This creates a sense that there are two forces at odds with each other, yet working together in harmony. This theme is reflected lyrically as Concannon sings about disconnecting from the battle between the stress and strain of modern life. Instead, relax into the flow of life and accept the constant flux of existence.

‘Primitive beat’ looks at the idea of a habitual daily rhythm of work & sleep that is within us all. The tracks’ droning chorus and militaristic beat enforces the idea that this unspoken pattern of behaviour has been exploited, forcing us to unconsciously conform to a commercially driven & capitalist society. The lyric “reward on a string, that seems to go on and on…” evokes the mindless, cyclical nature of our actions and how ultimately this is an empty journey that promises reward but generates very little.

‘Play Thing’ was the first single released from the EP. It’s a sarcastic & simple “love song” that speaks of the entrapments of a relationship in which the individual places value on the other’s beauty, power or financial stature too heavily. It talks about trying to achieve love through lavish gifts and big gestures. How love is often exploited or used as leverage in a relationship and the unhealthy nature of this dynamic.

The fourth track, ‘Trainspottin’, is a song of regret and hard learning. The alluring canter of the opening rhythms reflect the first theme that we can be happily lured into an unhealthy social situation, in which debauchery is encouraged. However, this energy eventually fizzles out and drains you, leaving you searching for someone that can help lick your wounds. In reality, this translates into too much fun on a night out and returning home with your tail between your legs, but still being greeted with love, comfort & forgiveness.

‘What I got ain’t so bad’ is a song about attempting to numb the reality of our problems and how it serves to worsen our issues. The song talks about the love/hate relationship with drugs and alcohol and how their severe effects allow you to temporarily escape the difficulties of life. The suggestion is that the use of drugs can provide relief from everyday stress, but also cloud your mind from the problem.
The final track titled ‘Why’, closes the EP with a stark, yet melancholy view on mental health and depression. The song talks about how hard it is to simply get out of bed some days and how heavy life can weigh us down. However, comfort can be found in the idea that this is a part of the human condition we all experience, perhaps influenced by our true ideals and how these fit with our reality. The suggestion instead is to attempt to just sit here and watch the world go by.

This theme of simple detachment from life’s worries brings the listener back to the opening track and the suggestion to simply disconnect from the unnecessary stress of life in the modern age, drop the ego, relax, and just take “Life as it Comes”.