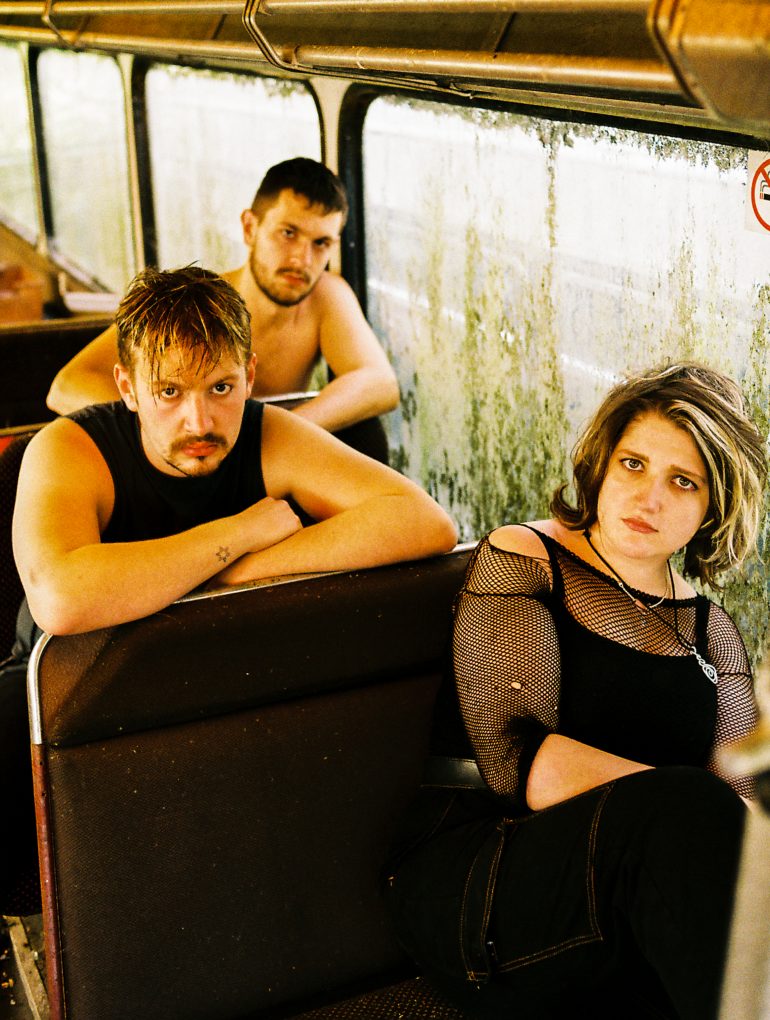 Abbey Blake (Pretty Happy): “Art is definitely a huge part of what we do…”

Hi Abbey! We are extremely excited to hear your new single Salami. Can you tell me about the process of writing and recording the new single?

Salami was actually the last song we wrote before lockdown! It was one of the first times I was comfortable in my own voice and in my own accent! Definitely the first time three of us sang together, which has become a theme with us lately. Salami started as an experiment of clashing vocals, myself and Arann talking over each other to create that chaotic, anxious feel. Andy’s sweet, sweet vocal melody then glues the whole song together. Our songs are usually quite guitar heavy but due to my singing I really laid off. The chorus vocals were done originally to make Andy laugh and then they just stuck. If we’re laughing that’s usually the sign of a solid song for us!

Pretty Happy have an incredibly unique sound and aesthetic. Can you tell me what inspires you as a band and how you would describe your sound?

I think as a band we draw influence from everywhere. We all have very different tastes which come together in a very noisy punky style. We’ve been called everything from weird to ‘that’s not music’, so take your pick.

How are you staying creative during lockdown? Has it made it hard to record music as a band?

As a band we love creating our own videos! With upcoming releases we’re lucky enough to be kept busy making music videos and shorts.

What is the biggest thing you miss about live gigs at the moment?

Pretty happy is described as “Art Punk”. I could not help but notice the emphasis the band puts on art and story telling in one of your latest music videos called “Shmuck”. How important is Art in terms of expressing yourselves as a band?

Art is definitely a huge part of what we do. Pretty Happy has become a release for us, whether that be through theatre, film, or music. It’s fun to blend the three. I think it started with our live shows, as they became more theatrical and absurd so did the songs. The feeling and performance of a set has become as important as the music. As I said it’s usually us trying to make each other laugh and we’re just lucky we have a name to put that under!

Lastly, what is the plan for ‘Pretty Happy ‘in the near future?

Honestly, it’s just been Salami tunnel vision for the last few weeks! SALAMIVISION. We have another single to come after Salami and an EP shortly after that. Whenever gigs are an option, we’ll be on every stage that can hold us, I mean have us!